Within Austin's idea of positive law there are three essential elements of each law: a command; issued by superiors to subordinates; and backed by sanctions[1]. In addition, the law must pass the "pedigree test" - that is it must have been created within the rules of creating a law for the given jurisdiction. Upon satisfying these four elements the law's validity is unquestionable.

Applying Austin's sentiments on positive law to Granovsky it becomes clear that the CPP provision is a valid law.

There is a command: the CPP itself, and more specifically the in question drop-out provision. These commands act to order people to make contributions and act in a certain way otherwise the plan will be of no benefit.

There are valid superiors (whom we habitually show obedience to) [2] issuing a law to subordinates as parliament is the recognized authority of Canada and the CPP is available for all Canadians. The general public can be said to be the subordinates, however, it is slightly obscure as people are not automatically required to abide by the CPP provisions. The program is a choice, thus people will opt in and out at their choosing. However, this does not change the fact that the public who choose to opt in are subordinates, they are giving money to be in the program and understand that they are expected to follow a certain set of rules in order to be able to reap the benefits.

The sanction component of Austin's valid law is satisfied in the threatened penalty. If one chooses to opt in to the CPP but then does not abide by the requirements, one may be denied the benefits. This acts as a sanction and is an attempt to ensure that the subordinates abide by the rules of the legislation. Granovsky illustrates the complexities that can arise from such an awkward opt-in/out system. There will always be those people that somewhat fit within the rules but not completely, Granovsky is one of such instances. Granovsky made contributions to the CPP thus he opted to be a subordinate. However, he failed to satisfy the conditions as set out in the drop-out provisions as he did not make enough contributions. Therefore, his failure to abide by the rules resulted in him being punished by the sanction component of the legislation.

With final regard given to Austin's "pedigree test" it becomes clear that this law was made in the correct manner. Parliament has the authority to pass laws and it can be assumed it came into being correctly.

However, issues arise when contemplating Austin's idea of the sovereign. In the Canadian system, people adhere to federal government by electing their representatives. These representatives are those that legislated the CPP, therefore, in essence they obtain their authority from the subordinate. This directly contradicts Austin's theory on the subordinate and sovereign and is tough to reconcile. Also of note, Canada's Charter is seen as a superior law governing all. Austin does not agree with this as by his view, as long as a law is valid it holds the same force as all other laws (regardless of its constitutionality)[3]. In addition, the idea of a superior and subordinate indicates that the superior is not bound by law, only the subordinate. Therefore, the fact that the Charter applies to all levels of government is also problematic from Austin's perspective.

Another issue with Austin's view is the role of the judicial branch. According to Austin parliament, and thus legislation, always trump judicial decisions. However, in many cases (including Granovsky) the judge is interpreting legislation and thus gives practical effect to what is inherently superior to their role. Therefore, it could be argued that the judicial and not the legislative branch has the superior status, which is problematic for Granovsky's view. Through this interpretation, the whole decision in Granovsky is suspect as it could be said that the judge is acting outside of his role as subordinate by interpreting legislation. Hart has the view that laws are human made inventions that are not dependent on morality in order to be correct. Hart says that disobedience is warranted where laws are immoral[4], but this is not the same as Thomas Aquinas - who said that if a law lacks morality then it does not exist. Hart organizes law into a primary and secondary category. Primary rules are those that tell the public what they can and cannot do[5]. Secondary rules are regulatory in nature and one can choose whether or not you follow them. Opposing Austin's theory, Hart states that laws do not have to be commands, all it needs to be valid is to be recognized by officials within the system (rule of recognition). Officials need to believe that they are obligated to engage in the behaviour and apply the law[6].

Applying these characteristics to Granovsky it becomes clear that the CPP and the drop-out provision is a secondary law as one can opt into it. It would be hard to classify as a primary law as it is not mandatory and is only there for those who want it. In a sense it could be categorized as primary as it says that if you elect to be included in the CPP you must abide by certain conditions. However, the fact that you are not required to abide by this legislation indicates that it would fall under the secondary category.

Granovsky points out that the CPP is not consistently applied throughout those who choose to opt in. As illustrated in this case there are certain requirements you must meet in order to be eligible for funding from the CPP and the courts will not hesitate to uphold provisions that justify exclusion in certain instances. In this sense one could argue that applying these dropout provisions violates too many rights and is therefore invalid. However, as is evident in Granovsky, officials have been engaging in the drop-out provision and are clearly enforcing it. Additionally, even if one said that the CPP drop-out was immoral, Hart does not believe a law's validity depends on morality. Therefore, the CPP and the impugned drop-out provision would be deemed valid.

What about s.15 of the Charter? The Charter is the ultimate remedy; it has the ability to change the law, and strike them down. Therefore, it can be classified as a primary rule as in effect, it states what one can and cannot do. Additionally, officials believe they are bound by Charter provisions and thus it satisfies the rule of recognition. 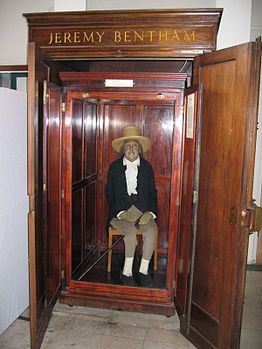 According to Bentham, the common good doesn’t matter, maximizing utility matters. In essence, Bentham separates morality and law as he states that laws need only help the most amount of people. This is close to the analysis that Thomas Aquinas takes as both identify the importance of the good for the community rather than the individual.

Applying this to Granovsky it can be argued that the CPP legislation is in place to effectively help the most amount of people. Although there is the contested drop-out provision, this is to ensure that the limited funds are allocated to those individuals who are in the most vulnerable position. Eliminating funds available to Granovksy and others in his position, is necessary to ensure that the most amount of people are helped to the best degree.

In analysis of the contested legislation, if parliament enacts poor legislation, the Supreme Court of Canada can override it. Additionally, common law is binding on parliament and can help to set parameters that must be met. These two features of the legal and legislative system help to create feedback loop that is useful in maximizing utility and moral good.

In Granovsky the CPP provision is a legitimate benefit to society as it organizes and allocates funds to individuals, who were at one point a benefit to society, but now cannot perform their required work. It is an opt-in provision and thus the beneficiaries of the program are not under a requirement to enter into the program. Should they choose to opt-in the CPP performs the service of furthering their individual good by reserving funds for them when there are no longer able to work. This allocation is reserved for those that have met the requirements as set out in the legislation.

Thomas Aquinas' theory centres around the following four elements in order for a law to be valid:

1) The law must serve the common good

2) The law must use logical steps to reach that goal

4) The law must be promulgated

It is easy to see that Austin's requirements of a valid law (a command; issued by superiors to subordinates; and backed by sanctions) can fit into Thomas Aquinas' theory. The idea of the superior and the subordinate fits well into the third aspect of Aquinas' theory. Arguably the necessity of the law being a command backed by sanctions can help to reconcile the promulgation (#4) and formulation (#2) aspects of Aquinas' theory as well. The main issue that cannot really be reconciled is the idea of the common good. Thomas Aquinas said that law is derived from morality, whereas for Austin morality does not really play a part in valid law. Opposed to Aquinas, Austin says that morality is separate from law and that if the laws satisfy the three requirements then it would be immoral to not follow them. This is the key difference between the Aquinas and Austin's theories.

Much like Austin, Hart also has no requirement for a law to be moral. Unlike Aquinas, if a law is immoral it still exists, however disobedience of that law is justified for its lack of morals. As opposed to this, Aquinas says that if a law lacks morality then it simply fails to be a valid law.

At first glance Bentham's theory seems to separate law and morality as well, however, effectively it could be said that he and Aquinas share this about their theories. Rather than a moral presence, Bentham is more utilitarian and asks whether the law helps to better situations for the most amount of people. On the surface this seems to be different than morality, but upon a deeper inspection it seems to in effect be the same. Thomas Aquinas views morality in almost the same way as one of his requirements of a valid law is that it serves the 'common good'.

Raz is another positivist theorist that could reconcile easily with Aquinas' idea of the 'common good'. If the law is performing a service for the subjects than it would usually be helping the common people and thus benefitting society as a whole.