The quote above is from the dissent in Egan v Canada. Cory J is attempting to expose the inherent logical fallacy of the majority’s decision, which he views as arguing that being in a homosexual relationship has nothing to do with being homosexual. Feminist theorist Catharine MacKinnon would have heartily agreed with Cory J, and taken the observation as an indicator that the Majority in Egan was too enveloped in the patriarchy of the legal system to successfully disassociate themselves from the confines of the traditional paradigm of marriage to make a neutral ruling in Egan. MacKinnon would best associate with the dissent because of the way it challenged the dominant, patriarchal view.

There are many diverse theoretical approaches to understanding society and social structure, through a feminist lens. Patricia Smith gives a nice overview of feminism and its diversity by connecting each theory with the common core tenants of feminism. At its core, feminism is focused on questioning and challenging traditional values. It assumes that traditionally the world as we know it has been structured by and for the patriarchy, which has negative results for women. The patriarchy is very pervasive, it presents itself as the ‘normal’ order of things in the world, for example, by being embedded in legal institutions. The largest branches of feminism are detailed briefly below, but Radical Feminism and Marxist Feminism are most applicable to the ruling in Egan v Canada.

1. Liberal Feminism
Liberal feminism is often considered ‘classic feminism’, and the core idea is that subordination of women causes “blocks” to access to success in public spheres, which are more valued in society than private spheres. Equality is perceived as an equality of opportunity for both men and women to succeed, and the best method for achieving equality is to remove the “blocks” that target women. Once this is done, gradually, over time, the system will equal out as the distorted levels of success normalize.

2. Radical Feminism
Radical Feminism is focused on the entrenchment of the patriarchy into everyday life, and argues that the patriarchy is so deeply rooted that the whole system must be ‘pulled out by the root’ for meaningful change to take place. Indeed, socialization into gender roles starts so young that we no longer know what ‘men’ and ‘women’ are when they are not doing gender.

3. Marxist Feminism
Is focused on labour, and the alienation and expropriation of labour between groups. It notes that the oppression of women is a function of the capitalist system, which devalues the private, domestic sphere in which women work but highly values work done in the public sphere by men.

4. Postmodern (French) Feminism
Postmodern or French Feminism rejects universal, meta-theories that purport to explain the world through a single lens, such as Marxist Feminism. Instead it prefers to examine the experiences of individual women as their lives are shaped by the patriarchy. For example, they embrace the way in which women are ‘other-ed’ by mainstream society, and the contract that otherness with how backwards it would be for women to attempt to un-other themselves by conforming to models such as the Reasonable Man.

5. Relational feminism
Relational Feminism places a stress on the way in which women’s socialization is different from men’s, and focuses in particular on the way in which women are taught to maintain and ethics of care and nurture their relationships. This stress to be a person who cares and nurtures then makes it very difficult for women to camouflage themselves as the Ordinary Reasonable Person because despite the shift in title from ‘Man’ to ‘Person’, the defining characteristics of the Ordinary Reasonable Person have not changed. 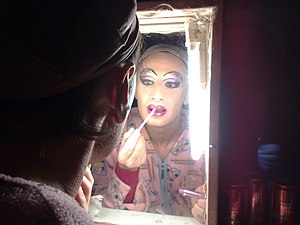 Putting on your drag

As a major feminist theorist, Mackinnon alleges that the dominant legal system grew together with the patriarchy over time. In other words, Mackinnon argues that men have predominantly organized society since the inception of the legal system, and as a result the very structure of the legal system reflects the needs of those who built it. This has created an inherent bias in the legal system, wherein the needs of men in power are taken into consideration, but the needs of minority groups or those without power are not. By creating an inherently inequitable system, the patriarchy has made it impossible for those acting to create a more neutral system to do so without being portrayed as seeking a special exemption. MacKinnon compares citizens of this system to fish in the ocean, who are so surrounded by the established norms of the patriarchy that they can no longer distinguish the patriarchal norms from neutral, every day life. Literally, fish-citizens of the patriarchal ocean who act out to change the system are portrayed as seeking an exemption or special treatment from the ‘neutral’ legal system, which is not in fact neutral.

The misconception held by society that their legal system is neutral feeds into other negative outcomes. For example, those seeking equality are portrayed as insidious, which contributes further to allowing law to remain the ‘site and cloak of force’ in society. MacKinnon considers the ‘site’ of law to be akin to a hammer, which applies force in the form of oppression to minority groups. The ‘cloak’ operates in tandem with the hammer, camouflaging its application of force through the use of neutral language meant to lend the law legitimacy. Together, the site and cloak legitimate the use of force on liberal society, rendering unjust laws and practices ‘just’ in the eyes of general society while oppressing those who attempt to expose the rouse in their pursuit of equality.

MacKinnon would note that this press for equality is not insidious but actually seeks to achieve a balance in rights. This sentiment is mirrored by the Dissent in Egan by L'Hereux-Dubé J where it is recognized that Canada – a traditionally patriarchal nation – has many vulnerable minority groups who have suffered under a fundamentally biased system. At para 89 L'Hereux-Dubé J writes that there are several "… highly socially vulnerable group[s], in that they have suffered considerable historical disadvantage, stereotyping, marginalization and stigmatization within Canadian society."

A Man as the Wife?

Marxist feminism would challenge the Majority’s ruling in Egan as forcing already biased, labour-alienating gender-roles onto homosexual couples. For the Majority, there is a concept of the man as the main beneficiary in society, a breadwinner. However, a same sex couple of two men challenges this traditional arrangement of the nuclear family; should both men be placed in a superior situation, where neither remains at home in the domestic sphere? Neither? The traditional placement of women in the domestic sphere devalues their contributions to society by not giving them monetary compensation for their labour. Marxist Feminist theory would argue that this capitalist gender role is being projected by the Majority onto homosexual couples – possibly because the Majority is not familiar with any other family arrangement – and because the projection cannot be made to fit, homosexual marriages are dismissed as uncomfortable.

For example, if society were to place two men as a couple, one of the men may assume the female role. This is uncomfortable in a patriarchal society because it cloaks the man in a lesser situation, the role of a woman. By taking on a female role and participating in domestic labuor his contribution to society are devalued due to the shift out of the formal economy, which men normally occupy.

The ruling that ‘spouse’ would not include same sex couples was, at the time, highly reflective of the patriarchal society of 1995. However, the Dissent is evidence of an incremental shift towards the feminist viewpoint, which more strongly recognizes and considers the needs of minority groups in Canadian society. Furthermore, the Dissent's approach better accounts for the emerging idea that specific gender pairings should no longer be the defining characteristics of a legal relationship Canada.