The principle of Natural Law is that law comes to us from a higher non-human, divine, source. Law is constant; however humans, being born with the power of reason, interpret it. Humans interpret law to right people’s behaviour toward the common good. Underlying this theory is that all law aims at arriving to an end that is morally right. Natural Law has a teleological view. This means that all things have a proper function and if they do not function as they should, they are no longer that thing. For example, a knife’s function is to cut; however once it becomes so dull that it can no longer cut, it is no longer a knife. Therefore if a law fails to do what it purports to do it is no longer a law. Natural law says that the law must have a certain moral content to be valid and because of this there are moral obligations to follow it.

“Law is nothing else than an ordinance of reason for the common good, made by him who has care of the community, and promulgated” - St. Thomas Aquinas

St. Thomas of Aquinas (1225 – 1275) was a Dominican monk who wrote on a variety of topics: theology, law, morality, and politics. (Dimock 3) His work Summa Theologica is the seminal source of Natural Law. In this work he states that there are four elements of a valid law: 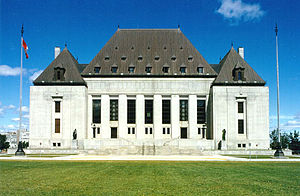 In E (Mrs.) v. Eve the principle law invoked is the common law doctrine of Parens Patriae. The Parens Patriae jurisdiction is founded on the necessity to protect those who cannot care for themselves (para72). The exercise of it is in the best interest of the person it is protecting. For example it was used in the case of RE K and Public Trustee to authorize a therapeutic hysterectomy on a “seriously retarded child”. It was in the child’s best interest to have the operation. However when a surgery is non-therapeutic the court must decide whether it would best protect the individual (12). In E (Mrs.) v. Eve, the Supreme Court held that in the absence of consent from the individual non-therapeutic sterilization would not be allowed. This was because it was impossible to verify that the act would benefit the person. Parens Patriae is there to protect the individual the possible effects on third parties, like Mrs. E.

Must be directed at the Common Good

According to Aquinas the law that guides human acts relates to people’s happiness. “Now the first principle in practical matters, which are the object of the practical reason, is the last end; and the last end of human life is bliss or happiness… Consequently the law must needs regard principally the relationship to happiness” (Article 2). We obtain this happiness from society as it satisfies are intellectual and spiritual needs. Therefore the happiness of the community i.e. the Common Good is paramount to the validity of a law.

In E. Mrs. v. Eve one of the issues is whether: “In the absence of statutory authority, does the court's parens patriae jurisdiction allow the court to consent to the sterilization of an adult who is mentally incompetent?” In regards to the common good the question is whether invoking Parens Patraie for non-therapeutic purposes would achieve the “common good.” In terms of Aquinas’ philosophy sterilization could never achieve the common good because procreation is a vital element in achieving it. Procreation is linked to stable societies and this is paramount to achieve the common good. However, barring the fact that the surgery is for sterilization, would Parens Patraie for non-therapeutic purposes achieve the common good? The last end of human life is bliss, would this bring bliss to Eve’s life? This is an impossible thing to determine. The only happiness that outcome would bring is that Mrs. E would not have to care for a grandchild. However as the court stated the purpose of invoking the doctrine is to protect Eve not to consider the desires of third parties. In the larger sense of the Common Good (all of Canada) this would not bring about the common good. This case was decided in 1986 only a decade before the Sexual Sterilization Acts in British Columbia and Alberta were repealed. If the court decided that it was for the common good that Eve should be sterilized this would be contrary to the current public opinion and policy throughout Canada.

Aquinas’ idea around this requirement is that the will of the sovereign is not enough to make a law and that the law has to have inherent practical reason.

The Court of Appeal held that the Parens Patraie Jurisdiction could be used in this case pursuant to the Mental Health Act. However the Mental Health Act only had provision for situations where someone who is incapability of giving consent can have an appointed committee for matters around property interests. The Supreme Court held that the language around this provision was too vague to invoke the doctrine because the issue is not about management of property; it is about a right to one’s body. The Supreme Court followed the Natural Law criteria that a law needs to follow practical reasons and in this case there was no clear rational to invoke the doctrine.

Must be made by a valid lawmaker Theory According to Aquinas the lawmaker has to belong to the whole people and who can represent the whole people. He also believed that the relationship between ruler and the ruled was a natural relationship. In question 95 of Summa Thelogical Aquinas poses the question, “Why is written law better than the law of judges?” His response is “As the philosopher says, “it is better that all things be regulated by law than left to be decided by judges.” He gives three reasons for this: 1) Easier to find a few wise men to write a law than it is to find many men who could rightly judge many single cases. (11.3) 2) Law is created with careful consideration, ample time and in respect to multiple examples; in juxtaposition judgements are pronounced immediately and one consider one example. 3) Law makers created laws in the abstract and for future events and judges are in the present and are therefore persuaded by love, hatred etc…

Aquinas lived and wrote hundreds of years before the existence of the common law, as it is today, the critical question is whether he would approve of Judges ability to set precedent, strike down laws, and do so without a natural relationship to the populous?

Parens Patraie is the law applied and debated by the Supreme Court in E (Mrs.) v. Eve. Parens Patraie is a common law doctrine. It literally translates to “parent of the nation”. The doctrine is a public policy power that allows the state to protect individuals who cannot protect themselves. This doctrine was created by the common law and is applied by judges. In the strictest interpretation of Aquinas’ works the doctrine fails the criteria to be a valid lawmaker. However Judges in Canada are appointed to the Supreme Court by the Prime Minister, who is elected by a majority vote in a democratic process; therefore as an extension of his valid appointment he selects justices to sit on the Supreme Court bench. Conversely it is likely that Aquinas would not see the Supreme Court as valid lawmakers, and in truth they are not. Their function is to interpret the law and not to make it; nonetheless in cases like this when the law debated is a common law doctrine there was no valid lawmaker who authorized it.

The principle of promulgation is that law must be written down and people that are subject to them should be aware of them. In essence, people need to be notified of the law.

Parens Patraie it is not technically a written law. As stated previously it is a common law doctrine. The only places that explicitly discuss it is the case law. According to Natural Law theorists this is not a promulgated law.

In conclusion, the doctrine of Parens Patraie fails at being a valid law through the Natural Law perspective. It achieves the common good and follows practical reasons; however it fails on being made by a valid lawmaker and being promulgated.