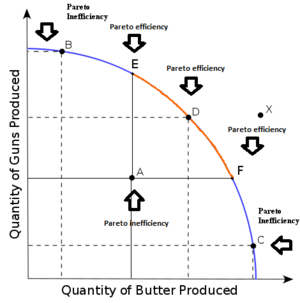 Economic efficiency uses “efficiency” as the justification toward legal rules. The purpose is to maximize the total wealth of all individuals. Contrary to theories such as Paternalism or the Harm Principle, economic efficiency does not justify law using morality, but rather, justifies that if a law is efficient, then such is sufficient for the law to be in place. Efficiency is measured as the social wealth of all, rather than the efficiency of an individual. Thus, it is possible for an individual to have a decrease in wealth, while society increases in wealth. Such is still considered “efficient” since the total social wealth increased, despite an individual losing wealth.

This is the ideal state of affairs in which one party is better off, but no one is worse off [1]. This standard is evaluated in comparison with other parties. Thus, in economic efficiency, the standard is relative to other individuals. In a given transaction, if there is an overall gain, then the transaction will be efficient, despite possibilities such as the land being sold at a lesser price than possible, or if a party over-paid for a good.

This test recognizes that in some transactions, there will be a party that gains a benefit, while the other party might suffer a lost. Under this test, a transaction is "efficient" if the overall benefit outweighs the cost. In other words, if the winner's gain is large enough to compensate for the loss of the loser (including external costs), then the transaction is still deemed to be "efficient."[1]. The Kaldor-Hicks Test compliments Pareto Superiority by recognizing that there are situations where the other party would lose, but that such would still render the transaction efficient if the loser can be compensated, to make the overall transaction efficient.

Similarly, in Contracts, parties enter into agreements for an exchange. Rationally, parties enter into agreements to receive a benefit, while the freedom of contracts allow parties to mitigate and compensate for losses by addressing them as terms of the contract. Alternatively, contract law also addresses breaches and compensation in terms of loss of profits, loss of capital, damages, and punitive damages in some cases.

The concept that in the presence of externalities, if there are no strategic distortion of cost, and the parties are perfectly informed in their decision-making, then the parties will rationally make efficient transactions.

If the theory was to be applied to Eldridge, the outcome would be consistent with that of the Supreme Court of British Columbia – no violation of s.15(1): Equality. Medical and Health Care Services Act creates an overall increase in social wealth that outweighs potential decrease of wealth suffered by the individual plaintiffs.