Austin is credited as the first legal positivist. Holding a fondness for Bentham and the principle of utility, Austin discerns between law and morality, and for establishing the criteria for laws that distinguishes them from moral principles. For Austin, a law is a command issued by a political superior to a political subordinate under the condition that disobedience warrants sanctions. Unpacking this criteria, laws may be either valid or invalid on the basis of their possessing these elements, and where a person has acted in accordance with the law can either be true or false.

Austin’s project was described as the development or autonomous analytic jurisprudence. In simpler terms, Austin undertook to study legal language and classify logical connections present in the most fundamental of its concepts. From this, Austin was able to infer the limits of the domain of law. Conclusively, Austin found, this domain is limited to the law itself.

For Austin, law can be either valid or invalid. This largely depends on whether statements of law are issued by a political superior to a political subordinate, and whether the statements are backed by sanctions. Hart, a legal positivist subsequent to Austin, looks the law making process, and specifically whether laws are adopted in accordance with law making procedures and legal jurisdiction. The pedigree test is often referred to as a combination of these ideas. It is applied to a retrospective view of law to establish whether current laws a arise from valid authority. This means that the pedigree test is a historical examination into the adoption of laws that examines continuity to establish validity. Hart is a legal positivist following Austin. His ideas take much from Austin’s position but contain a few subtle nuances. He characterizes laws in two ways. First, he talks about primary laws, which broadly deal with how law attempts to regulate citizen conduct. Primary laws effectively deal with people, and when broken result in the issuing of punishment. Next, Hart deals with secondary laws that regulate how laws are made. Secondary laws are administrative, and when broken have the result of invalidating primary laws.

Hart’s philosophy of law elaborates on traditional legal positivism. One example of such an elaboration is the rule of recognition. The rule refers to how a legal system justifies laws. Hart asserts that a healthy legal system requires law to be examined by duty bound officials. This is referred to as the rule of recognition. The rule simply refers to the enforcement of analysis of law with secondary laws and jurisdictional considerations necessary to validate their legal authority. Hart believes it essential that a legal system contain dutiful officials whose job it is to challenge invalid law. When this process is actively performed, laws are elevated above a status of mere-commands. For Hart, the utilization of the rule of recognition brings integrity to law. Failing to execute this duty results in moral mistake for officials of a legal system. 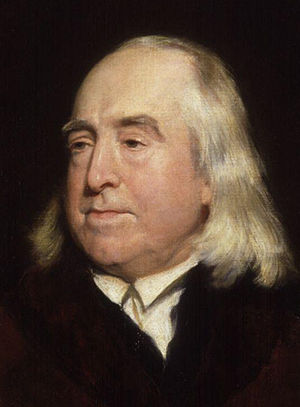 Jeremy Bentham is credited for terming the idea of utilitarianism. The idea holds that policy makers should seeks to create the greatest good for the greatest number. The idea creates a stark contrast to traditionally moralist thinkers like Thomas Aquinas, who would contend that the application of utilitarianism leads to moral pluralism. In other words, Aquinas would contend that moral concessions arise when performing utilitarian analysis of law and public policy. Rule focused moralists, like Aquinas, have generally been referred to as deontologists, and have been categorically placed in opposition to utilitarian thinkers historically. Features of the divide between these two ideologies is present between legal positivism and natural law theorists.

Bentham views law as man-made. He considers utilitarianism as a tool for analyzing law. Law should strive to bring the greatest good to the greatest number for Bentham. He thinks that morality is a unmanageable system for creating law.

On the other hand, Raz is a utilitarian. He holds utilitarian principles, and applies them to justifying law. Raz says laws are justified when they serve the public. He provides a modified utilitarian test to analyze whether a law serves the public. Raz asks whether in the absence of a law social betterment would result. If it is found that society is better served by the absence of a particular law, Raz argues it should be abolished. Subtly, Raz presents a position that places value on citizen's right to be free from government. H believes that the government should not interfere into the lives of citizens unless it can improve them. Raz presents law as a coordination of society that enables it to better attain its interests. His position exists within the broader and general aims of utilitarianism and eloquently adds to the positivist project started by Austin.

Controversy arises for Austin and Hart when applying their ideas to modern constitutionalism, both in England and Canada. The English approach to constitutionalism results in the use of convention as an authority. Convention presents difficulties for these legal positivists. Austin’s characterization of positive morality appears to be meant to include conventions. What he means by convention is the voluntary acceptance of rules, rather than the forced acceptance motivated by the existence of punishment. Perhaps, when unpacking the use of convention applied by the British Parliament, the word holds only semantic value. If so, the question must be asked as to whether failure to follow a constitution of conventions carries sanctions? If the failure to follow the constitution is enforced by the threat of sanctions, than the requirement is met; however, it is more likely that the punishment requirement is not met, and that constitutional conventions are more likely viewed by law makers as goals to be strived for by government rather than commands whose disobedience evokes punishment.

The problem with the English constitution will suffer similar problems as the Canadian Charter of Rights and Freedoms. The processes familiar to Austin obviously did not include democracy. The idea of the highest political superior being the results of a democratic process likely challenge Austin's political view. The complication in interpreting a strict interpretation of Austin, is determining whether he would frame the democratic approval of the constitution as his greatest concern, or the way it is applied to strike laws. Constitutions, when used to strike law, do not always resemble commands issued by a political superior as much as commands that limit a political superior. This is another form of how the democratic model challenge the basic assertions Austin holds on legal validity.

For Hart, apart from the problem that he does not contradict Austin on the validity of law, the focus on the Constitution will be historical. Hart's project involves more legal archeology than Austin, and his view of constitutionalism would seek to establish whether the government of the day possessed legitimate authority to enact a constitution. In Canada, this may have been an issue in terms of the pre-existent models that establish political authority.

Chaoulli v. Quebec (Attorney General), concerns the provision of medical care for residents of Quebec. The government argued that a single tier health care plan include an essential feature to government provided medical insurance schemes - that a two tier plan would diminish the quality of health services irreparably. Logical positivists, presented above, would have different views on the insurance legislation seeking to prevent a second tier of insurance being made available. Essentially, the issues for positivists will concern the validity of the two pieces of legislation. Utilitarian thinkers will consider the affects of the legislation.

Austin's logical positivism is concerned with the political superiority and inferiority of the parties that interact with the legislation. Austin would appreciate how Quebec's health care insurance legislation involves clear penalties. Austin's analysis of the Charter, as discussed above, presents obvious problems with the democratic model, under which both the insurance legislation and Charter were passed. Regardless of these staggering difficulties to appreciate modern democratic processes, a strict application of Austin's principles would hold that the Charter is not a valid law. Austin's application of the pedigree test would find problems with all the laws in this case; however, the Charter's intangible sanctions are likely the greatest hurdle to finding the law valid.

Austin may appreciate the moral and utilitarian interpretations of both the Charter, and the Quebec Health and Insurance legislation. In matters not directly concerned with legal validity, Austin might think differently about his version of legal positivism given these progressions in politics and law.

Hart's impression of the issues in this case would involve a similar reflection to that offered by Austin. Hart would be concerned with researching the historical validity and enactment processes involved with each article of legislation. Hart might find that the necessary validity of political processes were lacking in the approval of the Canadian Charter. Despite the acceptance of the Charter by the provinces of Canada, the legal validity of the document can only be confirmed where it is demonstrably justified as valid law. This process would involve the application of secondary laws, and much research.

Hart may think that the effect of the Quebec health and insurance legislation justify disobedience. Hart is certain to discuss the opinion of law as separate from whether the laws are valid or invalid. This means that his analysis will simply support the law as it is found to be valid by a historical pedigree test.

Bentham's concern with the legal issue would differ greatly from Austin and Hart. This is because Bentham's position on legal validity is normative. Unlike natural law theorists, Bentham thinks law should conform to moral outcomes rather than moral actions. Bentham's position on law examines the effects of legislation, and posits that law ought to result in the greatest good for the greatest number.

Where Austin and Hart treat legislation as a separate system of rules disconnected from social considerations, Bentham asserts that the effect of the law is determinative in its justification. Bentham offers the idea that enjoyment should be calculated and that law should be justified on the basis of whether it achieves the greatest good for the greatest number. Unfortunately, the process is clear and the result is not. The question of whether the Quebec health and insurance legislation achieves the greatest good is anyone's guess. The clear fact that the legislation's preventing a two tier system from being established resulted in the pain and suffering of the appellant, Chaoulli, is presented against an uncertain belief that a two tier system would be more harmful than good. The defence of the legislation is weak in this case. If evidence could show that the greatest good resulted from the legislation, the court's section 1 analysis would have found a rational connection to minimal impairment, and the Quebec legislation would have been saved. Thus, Bentham's principle is echoed by the application of the Charter, and has been adopted as a dynamic Charter value.

Raz is very similar to Bentham, but provides a utilitarian view from a different angle. Raz asks law markers to measure the value of their laws by considering what would happen if they were removed. His focus is on social outcomes, and he is interested in whether a law is necessary to achieve positive social results. Essentially, Raz's view of the legal issues in this case are the same as Bentham's. The primary distinction between these two theorists is that Raz has a different starting point in this approach.