Difference between revisions of "Course:SOCI1110/WEB DuBois" 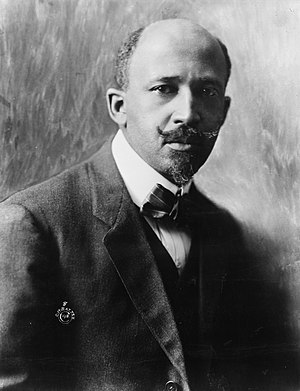 Formal photograph of an African-American man, with beard and mustache, around 50 years old

William Edward Burghardt Du Bois (1868-1963)[1] an American author, editor, sociologist. He finished his first academic book The Philadelphia Negro, which was concerned with the first case study of a black community in the United States. There were other famous works, such as, The Souls of the Black Folk which was concerned about his anger, rage, and sadness of what black people suffered. The books he wrote could serve as valid materials and sophisticated illustrations of intellectual Black people making contributions to the American history and human civilization.

William Edward Burghardt Du Bois, an American author, editor, sociologist, was born into an impoverished family in Great Barrington, Massachusetts. His parents separated when he was a child, and he stayed with his mother until 1884. Although he suffered a lot, eventually he turned out to be a marvelous student. With a partial scholarship, he was enrolled into the University of Fisk when he was only 15. During that time, he witnessed race discrimination, which had an influence on him and made him determine to become a sociologist and civil rights activist. Later, he went to Harvard University and graduated with a Doctor of Laws and Doctor of Philosophy.

DuBois had sympathy for China’s liberation cause and socialist construction. During the time of Sino-Japanese War, he raised money for China Welfare Institute in the U.S. After the foundation of the People’s Republic of China in 1949, he wrote to Song Chingling, saying that he was thrilled of the upgrading status of China in the world, and calling China the Real Brother. Later in 1959 and 1962, he visited China Twice. In 1961, he joined the Communist Party of the United States, and accepted the invitation of the president of Ghana, becoming a Ghanaian citizen. Later he compiled Encyclopedia of Africa and died in 1963.

W.E.B Dubois also wrote poems, fictions and essays. Since 1890s, he plunged into the United States and Africa’s liberation movements. What is worth mentioning is that he was one of the co-founders of the National Association for Advancement of Colored people (NAACP), the most influential civil rights group in American history. He had been the editor of the journal Crisis for 24 years. After that, in 1921, he participated in Socialist Party of America. However, he supported Woodrow Wilson, the Democratic candidate, which was a violation of the rule in the Socialist Party. Later, he was forced to get out of the party. During the Liberation Movement, insisting on positive efforts, he was against giving up. The American Communist leader William Foster regarded him as the greatest spokesman in the African history and the new outstanding leader of the black people. (David,L, 1994,)When Dubois attended Paris Peace Conference, he decided that it is a good timing to organize a Pan-African Conference to offer a platform for the world to realize the problems in Africa. Disappointingly, no black organizations showed a slightest interest in it. Eventually, Dubois held the first Pan-African Conference in 1923 but turned out useless. He met Marcus Garvey who was the promoter of Back-to-Africa Movement. After that, he traveled to Russia in 1927 and studied the ideas of a socialist, realizing that he could no longer support conventional integration efforts. DuBois continually examined the history of the black people. He even introduced the concept of “Talented tenth”, which was a group of black elites who helped other poor African Americans.(W.E.B,2013) Additionally, he held the view that higher education was essential for his race. In this way, DuBois gradually became the leading black intellectual in the 20th century.