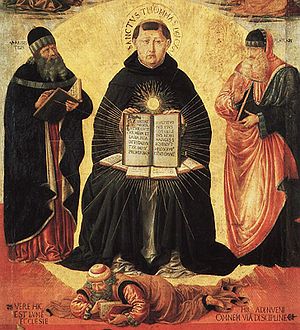 Natural Law Eagan v Canada [1995] 2 SCR 513
In the case of Egan v Canada, we are presented with a case in which a partner in a same sex couple has been denied access to spousal allowance. The reason for denial is that the definition of spouse in Section 3 of the Old Age Security Act was interpreted to pertain only to “traditional” married couples. The counsel for Egan submitted that the impugned provision violated Section 15 of the Charter. The majority did not find that there was a violation of s.15 because the purpose of the Act itself was “support and protection of legal marriage” (Egan v Canada, LaForest J., page 515).

Thomas Aquinas and Natural Law Theory
In the eyes of a natural law theorist, it is necessary that human law maintains consistency with the natural law. Human law must run parallel to the moral aims of the natural law. The concept of homogeneity and the “common good” was strongly embedded in the philosophy of Aquinas. This common good and the way we, as humans, act and reason based on what God has bestowed upon us. This “leading” by God sets out the law through reasoned steps and demonstrate how to achieve the objective of the laws – the common good.

In the case of Egan, the majority seemed to hold this sentiment of moral parallel in its ruling. As the objective of the legislation was to support the legal tradition of marriage, that being of a heterosexual relationship, it would seem logical to a natural theorist that the courts would find that recognizing same-sex spouses would divert from the shared path with natural law. In 1995, the gay rights movement was gaining momentum but the movement was not fully recognized. To put the timing into some context, the reference Same Sex marriage was 10 years after this case. While the dissent presented a strong case in support of changing the definition, it was not enough to change course.

The Four Elements of a Valid Law
1. Must be directed to the Common Good
This element is at greatest conflict for the case at hand. The Natural Law theorist would agree with the majority and Parliament that the law serves the Common Good in that the objective is protection the sanctity of the heterosexual marriage. Parliament would even further argue that it merely made a distinction between a married couple and single people cohabiting. Furthermore, it would actually serve Egan and his partner better if they were recognized as two single men as they would be placed individually in lower tax brackets.

The Natural theorists would note that finding in favour of Egan would have disrupted the Common Good as that served a more individualistic end rather than the good of the community. This is a very controversial aspect in the theory, particularly in application to Egan. Arguably, it would better serve the Common Good to uphold the values of the Charter than to serve a right-wing Christian ideology. What must be remembered is that this case was decided in 1995 and there has been great change in the political landscape on the topic. If same-sex relationships were not viewed equally, then the Natural Law theorist would find that upholding this order would maintain stability for the Common Good.

2. Must follow practical reason
The reasoning behind the ruling was to protect the sanctity of marriage and those accessing the system of benefits. If there were to be a liberal interpretation that could allow for any person in any type of relationship to be acknowledged as a spouse, the objective would not be reached. Parliament grounded its argument in ‘natural law’, and based much of its argument around the concept of the biological nature of the heterosexual marriage. The court acknowledged that while gay couples have a sexual aspect to their relationship, they do not procreate, which means they do not qualify for the social engineering that Parliament was trying to encourage.

Opponents to this approach would note that Parliament chose to extend the protections/benefits of marriage to common law couples, therefore they could have chosen to extend to same sex couples. However, under Natural Law, it is not the place for the courts to alter the legislation. Aquinas greatly favoured legislation over judge made law and this reasoning was echoed by LaForest at page 517, “In these circumstances, the Court will be more reluctant to second-guess the choice which Parliament has made. There is also proportionality between the effects of the legislation on the protected right and the legislative objective. The proper balance was struck by Parliament in providing financial assistance to those who were shown to be in the greatest need of assistance.”

3. Must be made by a valid lawmaker.
The law was created by Parliament and fulfills the requirement of the Natural Law theorist.

4. Must be Promulgated
The Act came into force in 1985, ten years prior to the case.

Ultimately, Aquinas would have supported the majority in Egan for upholding the moral law of the time and maintaining the parallel of human law and moral law.