Difference between revisions of "Category:Liberty/Paternalism" 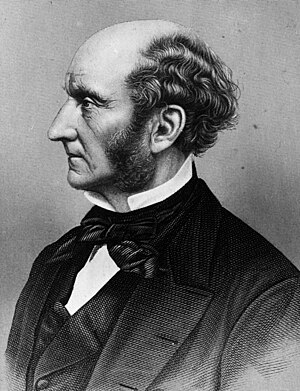 Unlike natural law and positive law, Liberalism is not concerned with whether or not morality is required for a law to be valid. Instead, it examines laws that work to enforce morality by limiting individual liberty. Liberalism looks at four theories which outline the circumstances under which liberty can be restricted: the harm principle, paternalism, legal moralism and the offence principle. John Stuart Mill, a prominent legal theorist and advocate for liberalism, puts a great deal of importance on individual liberty, and believes it should only be restricted when absolutely necessary. He believes in the harm principle which states that society can restrict liberty only if it is required to prevent harm against other members of society.[1]

In his now famous book, On Liberty, Mill outlines why he believes this to be the case. Because Mill believes that liberty is of the upmost importance, he states that it should never be restricted without just cause. The harm theory is based on the idea that liberty can only be restricted if it is necessary to prevent people from harming other members of society. To Mill, this is the only way liberty can be validly limited. Alternatively, paternalism prevents individuals from causing harm to themselves. To Mill this is a wholly invalid infringement on liberty, and should not be allowed in a free and democratic society.

Mill, however, does not believe in equal liberty for all. Children are exempted from this, and Mill believes that society should exercise complete control of children.[2] As they are not capable of full-formed opinions, they must be guided by strict societal rules. It is during childhood, says Mill, that society has the opportunity to form its members and instill moral and social values in them. After childhood, this opportunity no longer exists because forcing moralities on adults in unjustified an infringement of their liberty.

Application of Liberalism to the Case

The central question that the Supreme Court looks at in this case is whether or not society’s interest are served by the HEIA prohibitions on private health care in Quebec. Justice Deschamps states that the court must look at whether or not the prohibitions set out in the HEIA are “justified by the need to preserve the integrity of the public system”.[3] Mill would be wary of this question immediately; the only thing he would be concerned about whether or not people are harmed by the HEIA, not whether or not it preserves the public health care system. On Liberty discusses the power of the tyranny of the majority, and how it can work to infringe individual choice and put the good of the majority above personal liberty. To Mill this is should not be allowed, as individual liberty must come before all else (unless that liberty would result in direct harm to others). Under the harm principle, simply stating that the HEIA regulations serve society best would not be a valid reason to limit the freedom of private health care.

The impugned HEIA regulations that the court is addressing would clearly be of concern to Mill as they are a prima facie infringement on personal liberty. This would immediately raise red flags for Mill, and in order to sustain these rules Mill would require that they be necessary in order to prevent harm to others. The evidence that they did in fact directly prevent harm to others was very thin, and in fact Justice Deschamps found that they actually caused harm. Deschamps found that restricting Quebec to a one-tier health care system resulted in longer wait times which in some cases caused unnecessary deaths.[4] This finding would make it immediately clear that, based on the harm principle, the HEIA prohibitions cannot be sustained—not only do they fail the harm principle test, but they actually create more harm than would come from having no regulations at all. As Mill is always in favour of less governmental power and restrictions on liberty, he would agree with the court’s decision to strike down the impugned HEIA regulations.

Paternalism takes a very different approach than the harm principle does in examining when liberty is validly infringed. A paternalist would find that infringement is valid if is required to prevent citizens from doing harm to themselves. This is a much greater infringement than would be allowed under Mill’s iteration of the harm principle. For example, prohibitions on dangerous drugs would be allowed under a paternalistic approach, while the harm theory would only allow such prohibitions if dangerous drug use could be proven to cause harm to others (not just harm to the user). Gerald Dworkin’s theory of paternalism puts much more emphasis on potential incidental affects that come from negative actions, and thinks that where these exist it may be reasonable to limit liberty.

Application of Paternalism to the Case

In Chaoulli v. Quebec the court didn’t find convincing evidence that limiting the medical system to one-tier and eliminating private health care prevents harm to the citizens of Quebec. Under liberalism, solid evidence would be required to limit liberty in this way, while paternalism is much more flexible and puts less weight on individual liberty than liberalism does. Under a paternalistic approach, the Supreme Court could have found that inferences which suggest the HEIA regulations prevent harm to Quebec citizens would be enough to sustain them. The court, however, did not come to this finding and looked at the case in a way that is more akin to how Mill would examine it than the way Dworkin would.